In commemoration of the centenary of the start of the First World War, here are my notes on my ancestors and their immediate family members who served in the British armed forces between 1914-1918. I know of two immediate relatives who lost their lives in WWI, plus three relatives of my wife’s:

My great-great-uncle John Wears Gray was born in 1894 in Newcastle upon Tyne, the second son of corporation rent-collector Charles Gray and his wife Sarah née Wears. In the census of 1901, John, aged 7, was with his parents at the family home at 14, Dene Terrace, South Gosforth – at the same address in 1911 he was recorded as a 17-year-old grocers’ apprentice with the Newcastle Co-operative Society (John’s father Charles had died four years earlier, at the age of only 42, leaving five children and his wife Sarah expecting twins).

It appears that John Wears Gray enlisted sometime in 1915. Although his WWI military service record has not survived, John’s medal card records his rank (Private), regimental number (5132) and that he initially served in the Royal Scots regiment.

At some point, John was transferred from the Royal Scots to the 9th Battalion, Highland Light Infantry and given a new regimental number (350197); possibly he was one of the men who joined the H.L.I. near Mametz Wood in the Somme in northern France in July 1916 – this fresh intake of men was recorded in the regimental diary.

At 4.40am on Sunday 29th September 1918, “D” Company of the 9th Glasgow Highlanders moved out of their trenches behind the front line in the small French commune of Villers-Guislain, south of Cambrai. An hour later they charged the German lines in thick fog.

At Targelle Ravine, some 60 men led by Lieutenant Douglas Fountaine Brodie found themselves too far forward and cut off from the rest of the brigade. They dug in and sent a message asking for instructions (the order to withdraw given in reply was intercepted – the messenger was taken prisoner). Most of the men at in Lt D. F. Brodie’s isolated party at Targelle were captured. Lt Brodie escaped capture by feigning death, but was killed in action a month later.

John Wears Gray was one of more than 350 men killed in the fighting at Villers-Guislain on this single day in September. He was 25. Next morning’s entry in the regimental diary begins:

Screenshot from the Ian Hislop episode of the BBC’s ‘Who Do You Think You Are?‘ programme, showing John Wears Gray’s headstone at Targelle Ravine British Cemetery, Villers-Guislain. Broadcast on Yesterday, 14th November 2013

David Murdoch Hislop, the paternal grandfather of the journalist & broadcaster Ian Hislop, served in the Highland Light Infantry alongside my great-great-uncle John Wears Gray, and also fought at the battle of Targelle Ravine. In the first series of the BBC’s family history programme ‘Who Do You Think You Are?‘, Ian Hislop travelled with his family to Villers-Guislain and retraced the footsteps of his grandfather in the battle on 29th September 1918. In a sequence filmed at the Targelle Ravine cemetery, the camera pans along the line of white Commonwealth gravestones, and John Wears Gray’s own headstone can be clearly seen on screen.

John Gray was posthumously awarded the standard Victory and British campaign medals which presumably were sent to his widowed mother Sarah. His name is inscribed on a memorial plaque at St Nicholas’ Church, South Gosforth – images of the memorial are available on the North East War Memorials Project website.

Another two-greats uncle, the son of butcher/publican William Stainthorp and Margaret Anne née Harland. Francis Stainthorp was born on 19th January 1886 at the Crown and Anchor Hotel, Main Street, Redcar, Yorks., where his father William was landlord. By 1891, William Stainthorp had taken over the licence at the New Inn, Skelton-in-Cleveland, and the 4-year-old Frank was listed there on the ’91 census.

By 1901, the Stainthorps had moved to 57 Castlereagh Street, New Silksworth, a mining-village suburb of Sunderland, and William had returned to the usual Stainthorp family occupation of butcher. Frank married Mary Lena Mason in Sunderland in 1910, and by 1911 the newlyweds had set up home in a three-room tenement on Burdon Lane, Ryhope, County Durham – Frank having followed his father into the butchery trade. One daughter, Margaret, was born in Ryhope on 14th January 1911 – a second, named Mary Lena after her mother, followed on 31st March 1913, after the family had moved to nearby Seaham.

Francis Stainthorp enlisted in the army on 9th September 1914 at Seaham Harbour, County Durham, joining the 14th Battalion, Durham Light Infantry with the rank of Private; regimental number 21653. He was 28 years old – his attestation papers recorded that he had previously served in the Northants (or possibly Northumberland – the handwriting is not clear!) Hussars, a Yeomanry regiment. He gave his occupation as butcher; his medical record shows that he was 5′ 9¼” tall and weighed just over nine stone.

While undergoing basic training at Halton Park near Tring in Hertfordshire, Frank was promoted to Lance Corporal. (He was stripped of this rank in 1915 after being picked up drunk and absent without leave, having overstayed his pass. He further marked his card in 1916 when he was arrested and tried by Field General Court Martial for “conduct to the prejudice of good order and military discipline” – Confined to Barracks for 10 days. He was eventually reappointed L/Cpl on 12th February 1917.)

In February 1918 Frank was among 200 soldiers transferred from the 14th to the 19th Battalion of the Durham Light Infantry while the latter was encamped behind the front lines at Poelcappelle in Flanders.

By 31st October the same year—in the final “Hundred Days” offensive of the war—the 19th D.L.I. were in the front line north of Avelghem. At 5.35 on the morning of the 31st, the Faithful Durhams attacked along with two battalions of the Lancashire Fusiliers. By 10.30am they had taken all objectives along with 350 German prisoners, and the British Army controlled a stretch of country to the east of Avelghem as far as the small village of Kerkhove with its church dedicated to Saint Amand (Sint-Amandus).

However these gains came at a heavy cost. 102 British soldiers were killed on this day at Avelghem.

21653 L/Cpl Frank Stainthorp, aged 32, died of his wounds on 31st October 1918 near the village of Kerkhove; he was buried in the churchyard at Kerkhove Sint-Amanduskerk. In November 1922, as part of a programme of ‘concentration’ of scattered individual British and Commonwealth war graves into larger cemeteries, his body was exhumed and moved to the huge Bedford House Cemetery near Ieper (Ypres).

Frank Stainthorp’s name was added to a memorial plaque which was erected at Chester-le-Street Wesleyan Methodist Church in June 1922. However, the plaque was lost when the church was later converted into a private house. Details of the memorial are available on the North East War Memorials Project website.

I have not yet been able to trace what happened to Frank’s family in County Durham after the war. His daughter Margaret may have married Reginald S. Godfrey in Middlesex in 1934.

My wife’s great-uncles George and Arthur Black were brothers: two of the thirteen children of agricultural labourer William Black and his wife Mary née Pask of 35, Hope Street, Lincoln.

George Mabbott Black was born on 30th November 1890 in Sturton-by-Stow, Lincs.; his middle name “Mabbott” was the maiden name of his maternal grandmother. A farm waggoner, he joined the Royal Navy and by 1915 was a Stoker on the destroyer HMS Wolverine. He died on 27th August 1915 in the Eastern Mediterranean, presumably while on active service as part of the Dardanelles Campaign. He was 24. George is commemorated at East Mudros Military Cemetery on the Greek island of Lemnos (Λήμνος).

Lincoln City War Memorial and St Benedict’s Church
The names of George M. Black, Arthur Black, and William B. Foster are inscribed on the High Street memorial
© Copyright Tom Bastin and licensed for reuse under this Creative Commons Licence

Arthur Black—the younger brother by 6 years—was born on 2nd May 1897 in the City of Lincoln itself. He became a Private in the 1/4th Battalion, the Lincolnshire Regiment; his service number was 1824. He died on 13th October 1915, at only 18 years of age, in the “useless slaughter of infantry” of the Battle of the Hohenzollern Redoubt. His name is inscribed on the Loos Memorial in northern France, one of the 3,643 Allied casualties of the battle.

William Bassett Foster was my wife’s great-great-uncle (two greats). He was born in 1889 in Lincoln: the son of house painter Thomas Foster and Hannah Cass née Bassett, of 63, Burton Road. Like Arthur Black, he was a Private in the 1/4th Battalion, Lincolnshire Regiment; service number 2783. He was killed in the same battle on 13th October 1915, aged 26, and is also commemorated on the Loos Memorial.

William Foster’s name—along with George and Arthur Black’s—can be seen on the city war memorial on Lincoln High Street.

6. Other relatives who served and survived the war

This list will grow as I discover more service records.

*I am greatly indebted to my distant cousin Nigel Butterfield who provided the information on the four Curry brothers who were my three-greats uncles. 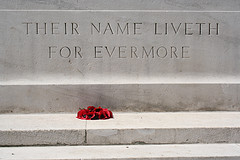